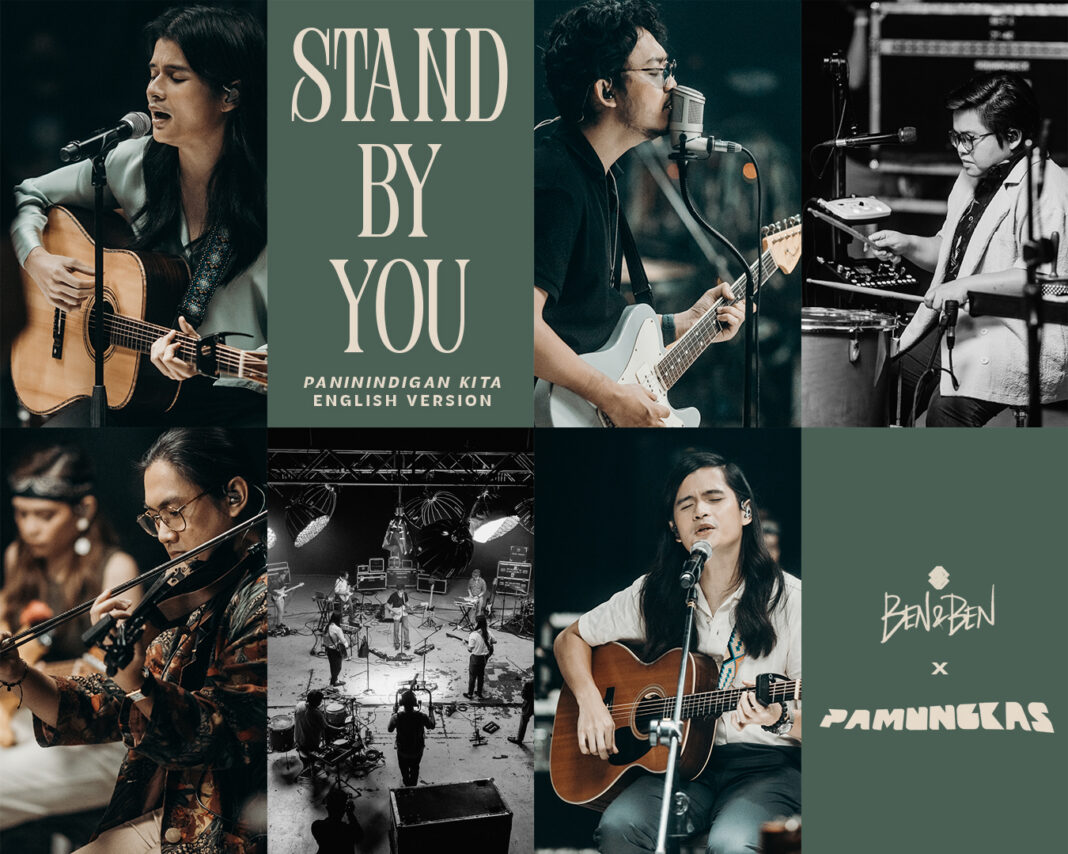 Filipino nine-piece collective Ben&Ben has recently joined forces with Indonesian singer-songwriter Pamungkas to release a performance video of “Stand By You.” The infectious pop-rock original, which is an English translation of Ben&Ben’s 2022 hit “Paninindigan Kita,” was recorded at SoundCheck Studio in Pasig City last August 5, 2022 (Friday).
Prior to the live studio session, both regional superstars were introduced to each other online last month, and got the chance to brainstorm on how to approach the song with a collaborative mindset. “We sent over a rough translation of our song Paninindigan Kita,” shares Ben&Ben in a statement. “He [Pamungkas] came up with brilliant lyrical ideas, and we ended up co-writing the English lyrics for this song with him.”
Ahead of their sold-out show at 123 Block in Mandaluyong City, Philippines, Ben&Ben and Pamungkas recently recorded a live performance of “Stand By You” complete with a fuller, more intricate arrangement and reassigned verses. The chart-topping Filipino band is more than happy about the result of the session, and how it brought the best of both worlds in one project.
“There was a natural chemistry between both artists,” says Ben&Ben. “This came out in the way the instruments were arranged and the different parts were worked into the final version of the performance.”
Ben&Ben also praised Pamungkas on how he managed to add a totally new vibe to the song, while injecting his own flair into the instrumentation. “This made the collaborative version very distinct in a way that represents both styles blended into one performance, instead of it being a straightforward cover version of the song.”
“Stand By You” is the first of the two-part collaboration between the prolific and award-winning Asian artists. They’re also set to release the performance video of “I Got To Get You” soon.
Pamungkas is currently headlining his own Southeast Asian tour to promote his fourth studio album, Birdy. His hit single “To The Bone” was a huge regional success, topping Spotify Indonesia Top 50 charts for several weeks and peaking at No. 5 on Spotify Philippines Top 50 charts last year. The song also performed well commercially in other Southeast Asian countries, particularly in Thailand, Singapore, and Malaysia.
Ben&Ben is set to conquer the international stage with their first North American tour, performing in iconic and key venues across nine cities in the US and Canada. They’re also gearing up with the release of their new international single this month—ahead of their send-off concert on September 3 at the CCP Open Grounds.
Watch the live performance of “Stand By You” here: