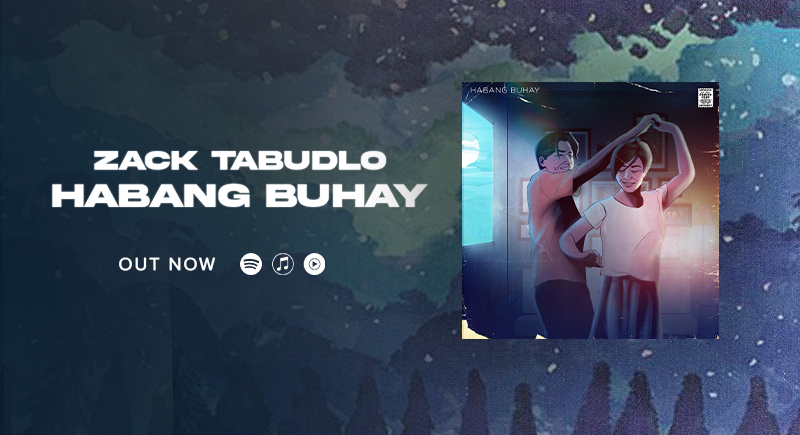 Filipino singer-songwriter/producer Zack Tabudlo transports the joy of long, lasting real love on his new single “Habang Buhay”—out today on all streaming platforms via Island Records Philippines and MCA Music Inc.
Expressing security in the promises of unconditional romance, Zack Tabudlo allows himself to bask in the golden feeling of being swept away by love, while looking forward to more affectionate years with that special someone.
“Habang Buhay has its own life with the happiness itself of the song alone,” says Zack Tabudlo in a statement. “I haven’t written any song with such a happy and positive meaning before, so this is definitely something different.”
Written, produced, mixed, and mastered by Tabudlo himself, the shiny, retro-pop tune is inspired by a lot of old school OPM classics such as VST & Company, and other ‘80s songbook stalwarts such as The Police and Fra Lippo Lippi.
Taking into the account the nostalgic tendencies of his influences, the young music prodigy makes the song current with its explicit nod to more melodic, guitar-pop stylings that have come to define his hits—from the chart-topping “Nangangamba” to the streaming smash “Binibini.”
A music video will be released soon to complement the song’s effervescent vibe, but Tabudlo is mum about its entire concept. The alt-pop hitmaker assures, “There will be a music video for it but I’d love to keep the people behind it a secret for now. I love to give the fans a big surprise.”
Zack Tabudlo’s “Habang Buhay” is out now on all streaming platforms worldwide via Island Records Philippines and MCA Music Inc.

About Zack Tabudlo
Young Zack Tabudlo wanted to conquer the world—a feat that is aspired by many. An abstract concept that encompasses the realization of one’s ideals as they stand on top of all they have ever dreamed of. An end goal for many. A meter of success.
Zack thinks differently. Since he was a child, he’s had a clear view of the path he wants to take. He knows that conquering the world is not an overnight achievement nor a single-day celebration of whatever success means. For Zack, to conquer the world means to continuously wield the gift that is given to him—music.
At the age of 10, Zack became a finalist in the reality talent show Talentadong Pinoy. At 12, he made Coach Bamboo Mañalac turn his chair upon hearing the first note of his audition piece for The Voice Kids Philippines.
Being a part of the competition pushed him to form the youth singing group, Gravity, with his fellow contenders. With Zack as its frontman, Gravity’s ensemble released Imposible, a song about an unrequited love sung in a catchy pop beat. Aside from Gravity, Zack was also one half of the teen pop duo Zack and Fritz with fellow The Voice Kids alumna Eufritz Santos.
He began his solo music career in 2018, venturing not only in performing but also in songwriting and music production. He believes that to conquer the world of music means to understand and experience it holistically.
“[I have] Worked with different producers—international and local—for months. And having to incorporate all the styles these producers and artists have shown me—it’s definitely something different.”
He plunged even deeper into his passion under the mentorship of Jonathan Ong and Chris Anthony Vinzons of Sonic State Studio. He was also mainly mentored by Cleng Saturno and even got the opportunity to learn from celebrated composer Vehnee Saturno.
In 2020, Zack joined Island Records Philippines where he continued honing his identity as a musician. His singles Nangangamba, Cruel, Sigurado, Iyong Iyo, and Elizabeth are testaments of his evolving creative songwriting and production style. The versatility in infusing the elements of pop and RnB with his arresting vocals is unique in his genius.
This dynamic artistry has launched Binibini, another masterpiece that would bring him to an even bigger canvas in Times Square, New York City. Being featured in one of the most bustling cities in the world is more than just exposure—it’s the realization of his dreams. The record-breaking track reigned at the top of Spotify charts for six consecutive weeks and has been the longest-running #1 local track by a Filipino RADAR artist on The Philippines Top 50 Chart in 2021. The same song topped the charts for four consecutive weeks in the Global Viral chart of the same platform.
This gained him a global footing and made it to the Viral 50 charts of Canada, Singapore, Hong Kong, Saudi Arabia, and UAE. His world-class appeal also gained him an international collaboration with British singer-songwriter James TW. Through this team-up, Binibini was reimagined in English with the title Binibini (Last Day On Earth).
“Everything that I achieve, small or big, are milestones to me.”
For Zack, everything that happens in his career is an important experience that will make him grow more as an artist. His Alt-Pop and RnB genres that have captured the hearts of his listeners are, in his own words, “windows” to other genres he wishes to explore in the future. As an artist who continuously challenges convention, Zack is excited to create bigger things for his fans.
“There’s a lot of power you can gain with your craft and a lot of consequences and responsibilities you have to commit along the way. Values and roots are also a big reminder to stay grounded through the process… To think of all the things you went through before, and people who believe in you and guide you, are in a way my motivation to become better and bigger at my craft.”
The young artist believes that keeping his feet on the ground means maintaining his footing as he continuously runs towards his dream–to conquer the world through music. Because for Zack Tabudlo, “music itself was the dream.”